What you need to know about the forces reshaping our industry.

He thought he misplaced his dentures during surgery. After 8 days and 2 ED visits, doctors found them—in his throat.

Editor's note: This popular story from the Daily Briefing's archives was republished on Oct. 20, 2020.

When a 72-year-old patient's dentures went missing after a minor abdominal surgery, everyone assumed they were misplaced. It wasn't until the patient returned to the hospital twice for throat pain, trouble eating, and vomiting blood that providers solved the mystery of the dentures, according to a paper in BMJ Case Reports.

How a man ended up with dentures in his throat

According to the case report, after the patient—a British male who was treated at an unidentified hospital—woke up from his abdominal surgery, he noticed his dentures were missing, but assumed they had been misplaced at the hospital.

Nearly a week later, the man ended up in the ED coughing up blood, saying he had been experiencing throat pain and had been unable to swallow solid food. Doctors examined his throat and found nothing unusual. A chest X-ray and blood work led them to believe the man had a lower respiratory tract infection and they sent him home with medication. The doctors said the pain he was experiencing was likely a side effect from having a tube inserted in his throat during his abdomen surgery.

Two days later, the man was back in the ED, telling doctors in a "hoarse breathy voice" that he was unable to swallow the medication he was given and was still coughing up blood, the report said. He also had a difficult time breathing, especially while lying down.

At that point, doctors grew concerned that the man had developed pneumonia and admitted him to the hospital. The doctors examined the man's neck further and found nothing. The doctors then decided to take a closer look, and inserted a thin tube with a camera on the end. They discovered a "metallic semicircular object" that was covering his vocal cords, "completely obstructing their view," according to the report.

The object was wedged against the man's epiglottis, which keeps food from entering the windpipe and lungs, and had caused irritation and swelling. 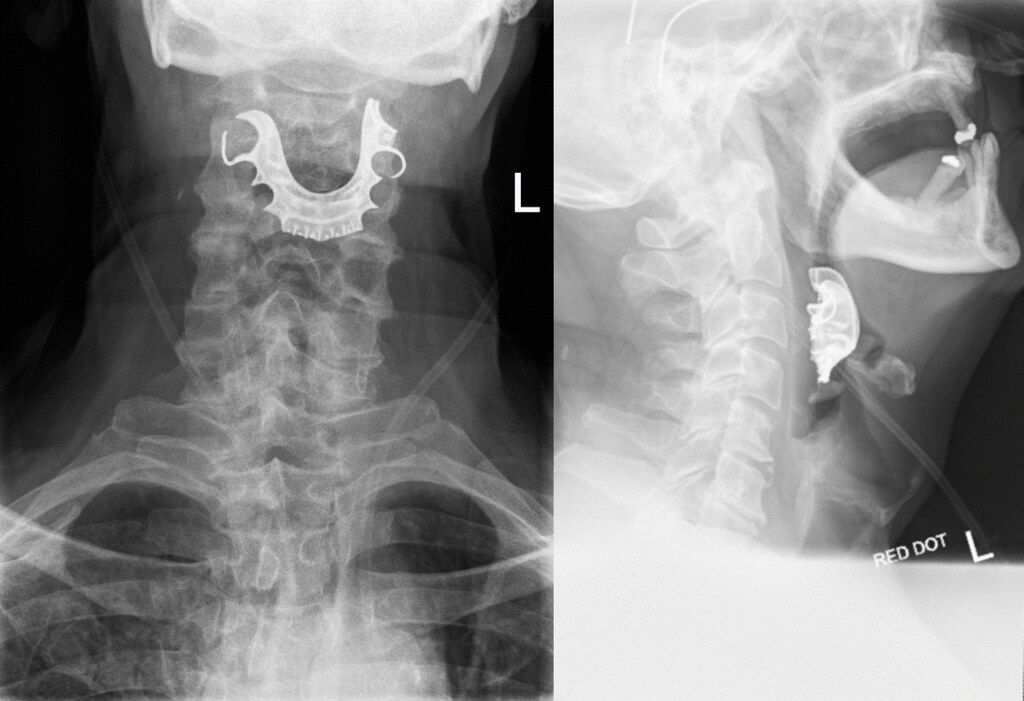 When the doctors told the man about the object, he remembered his dentures—a metallic plate with three front teeth attached to it. Eight days after the initial surgery, an X-ray confirmed the problem, and doctors whisked him off to surgery where they pulled out the dentures with a pair of forceps.

While doctors were able to remove the dentures from the man's throat, his recovery was difficult, the report said. In the weeks after his dentures were removed, the man came back to the hospital multiple times coughing up blood. In one visit, doctors estimated he lost about three pints of blood.

Doctors discovered the source of the bleeding was "a spurting arterial vessel" in the man's throat that had been covered by tissue during the healing process. The man underwent an emergency surgery to repair the artery and recovered from the procedure well, according to the report.

"There are no set national guidelines on how dentures should be managed during anesthesia," Cunniffe said. She added that some hospitals allow false teeth to be left in a patient's mouth until right before they're intubated.

Another important lesson for doctors, according to Cunniffe is to "[a]lways listen to your patient." The man's chest X-ray and bloodwork indicated he had a respiratory infection and "acted as a distraction" from the true cause of his pain, Cunniffe wrote.

"Listen to the story the patient is telling you and do not be distracted by positive findings on investigations," Cunniffe wrote (Chiu, Washington Post, 8/13).