Obamacare is more than exchanges: A look at the law, in three charts

The Affordable Care Act's first open enrollment period is closing down, and sign-ups in the exchanges are surging. And that's prompted a surge in assessments of whether the law's been successful, too.

But in too many places, pundits and politicians' focus on "grading Obamacare" has come down to simply grading exchange enrollment.

There are several problems with this approach.

First, it's too soon, as Charlie Ornstein points out at ProPublica. We still lack the full context and don't have the right metrics, like how many previously uninsured Americans used the exchanges to get coverage.

It's also too simple. Whether final exchange enrollment falls closer to the CBO's initial prediction of seven million sign-ups or nearer to its revised prediction of six million likely doesn't matter much for insurers, providers, or even the law's long-term success.

And, frankly, it's too easy. National enrollment figures are absolutely worth tracking, but the better story is a harder one: Delving into the trickier-to-figure-out aspects of the law.

Don't forget; the ACA isn't just insurance exchanges. Yes, the law has a comprehensive set of reforms intended to expand coverage—but also to lower cost and boost quality too, all part of the "affordable" and "care" elements of reformers' vision.

"The components of the Triple Aim are not independent of each other."

And these provisions are interwoven, perhaps more than is commonly acknowledged. "The components of the Triple Aim are not independent of each other," Don Berwick and two co-authors wrote in Health Affairs in 2008, laying out the philosophy that would come to underpin the ACA. "Changes pursuing any one goal can affect the other two, sometimes negatively and sometimes positively."

For example, the law's massive coverage expansion will likely end up increasing national health spending, which is currently growing at a historically slow pace. It could even harm care quality, if providers don't have enough capacity to promptly and comprehensively treat these new patients.

So how can we better understand Obamacare's launch? By quickly examining the following three provisions: Medicaid, ACOs, and readmissions. Each is getting much less press than the exchanges right now, but there's a pressing reason to focus on each.

Each call features a national review of the roll-out and live Q&A on how the reform law is changing the nation's health system. Join us!

The six-month focus on HealthCare.gov and the exchanges nudged the other major coverage story out of the headlines: The ongoing saga around which states were expanding Medicaid.

As of this weekend, twenty-six states and Washington, D.C., had opted in to the ACA's Medicaid expansion, in some form. And at least 4.5 million Americans had been enrolled through these expansions, Noam Levey reported for the Los Angeles Times.

But in the other 24 states holding out on Medicaid, just as many Americans—nearly five million—are falling into the ACA's accidental coverage gap. In places like Florida and Texas, residents make too little money to qualify for subsidies on the exchanges, but too much to get enrolled into Medicaid under their states' current eligibility levels.

As the map indicates, the holdout states generally remain across the South and Midwest—states where local leaders are concerned about the political and financial costs of opting into the program. Regardless of the reasons, the decision to sit out is causing short-term pain for providers and has real implications for the law's long-run success, too.

"Obamacare will be a failure until Medicaid expands in red states," The New Republic's Alec MacGillis concluded last week.

"We have passed a law meant to expand coverage to all Americans, and yet it does not reach the poorest of our fellow citizens in nearly half the states in the country."

As Daily Briefing readers know well, the ACA also includes a slew of reforms intended to shift providers away from fee-for-service reimbursement and toward fee-for-value.

For instance, the law features value-based-purchasing provisions, which withhold and redistribute a small amount of reimbursement from providers, and represent the first real step by CMS toward pay-for-performance. (More on this in a second, in the context of readmissions.) And the ACA also has fostered several major payment pilots, such as Medicare's bundled payment and accountable care organization (ACO) initiatives. Both programs have lured hundreds of participants thus far.

Do your colleagues need to see this? Share it with them.

It's too soon to tell how well the ACO payment reforms are working; the early evidence on achieving shared savings is mixed. And it's not surprising that some participants already have decided to drop out, the Advisory Board's Tom Cassels told me last year.

"What will be truly instructive," said Cassels, "is studying the differences between the experiences of these early departures and the participants who meet both their own internal objectives and CMS’ savings objectives over the long term."

Meanwhile, some experts believe that the health care sector's slowing growth (aka, "slowth") partly reflects the shift toward these models—not just by CMS, but by private payers that are following the goverment's lead.

On the care quality front, there's a less equivocal connection to the ACA: The law appears to be having a real effect on readmissions rates, which refused to budge for years.

Specifically, the ACA's Hospital Readmissions Reductions Program allows CMS to withhold up to 1% of regular reimbursements for hospitals that have too many 30-day readmissions for heart attack, heart failure, and pneumonia patients.

The threat of penalties prompted hospitals to institute new programs—like home care visits and free medication—that seem to have translated into lower all-cause readmissions. The map below tracks the percentage point change in Medicare readmission rates by hospital referral region, beween January and August 2013 compared to the average across the 2007-2011 period. 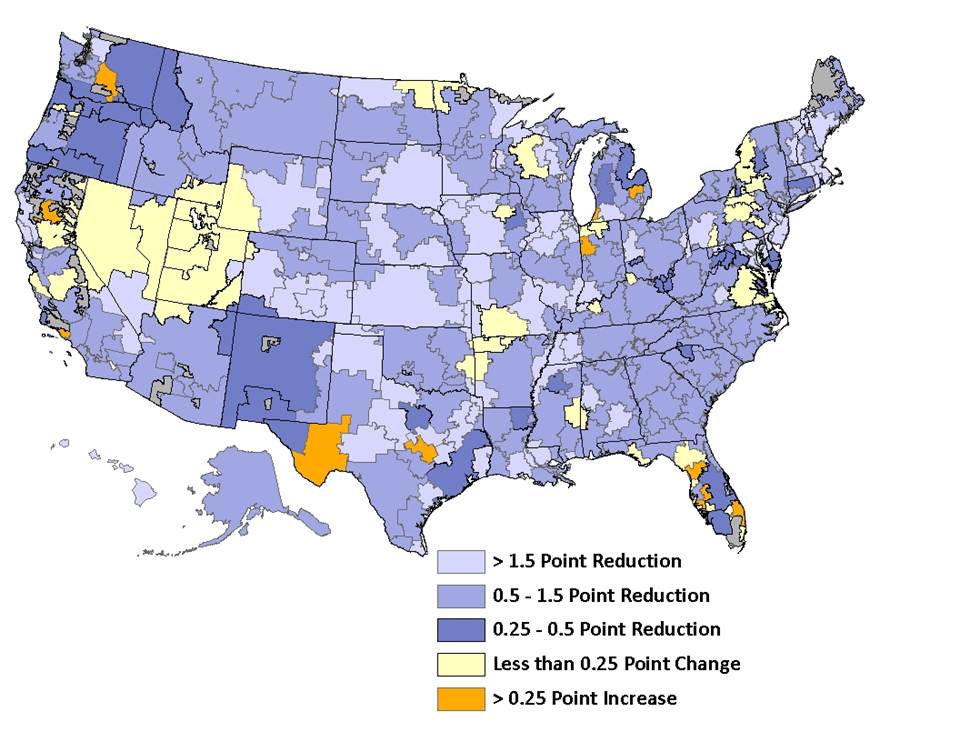 If these early gains prove lasting, and the reductions in readmissions continue, CMS will be able to crow about a dual achievement: Better quality at lower cost.

Having introduced readmissions and VBP initiatives, regulators are now gearing up to test the power of penalties through a third pay-for-performance program—the ACA's hospital-acquired conditions reduction program, slated to launch for FY 2015.

Recommended for You
Related Upcoming Events